Write LA
Write LA
2022
Reads in Coverfly
Active Since 2018
A writer run comp. 5 finalists read by Lit Management Companies, and prizes for all semifinalists. Our winners get repped thanks to us!
Subscribe
Currently Closed. Subscribe to receive a notification when the next season opens.

**A Moviebytes Top Screenplay Contest for 2022**

Our 2021 and 2020 winners have signed with Literary Managers, and a 2020 Finalist had their script optioned, all thanks to us!

'The Write LA competition helped give us the exposure we needed to create valuable connections in the industry. Few screenwriting competitions are worth your time, this is one of them. '

Write LA gives five finalists access to industry representation. We partner with highly regarded Literary Management Companies who read and consider our top 5. Our Grand Prize winner receives a cool trophy, and the honor of being named top script in a competition growing in industry influence and respect every year!

We don't just help you gain access, we also help grow your command of the craft. Our winner and finalists receive a free copy of the latest Final Draft screenwriting software thanks to our sponsor Final Draft, and help with their logline by our co-founder and repped/working screenwriter Angela Bourassa.

Write LA was built by writers, for writers. We offer all the access, recognition and feedback we can, because we know how hard writing is, and we have a tremendous amount of respect for all the effort you put in.

Write LA is open to writers around the world. Feature screenplays and TV pilots are accepted - any genre - and are judged together. We’re not looking for a particular genre or format – we’re looking for great writers.

We look forward to reading your work!

• Written feedback may be added to any entry at a rate of $95. The feedback will consist of one page of notes focused on what the script does well and areas of possible improvement including helpful suggestions. All feedback is written or edited by Head Judge Tim Schildberger. All feedback will be delivered after the Semifinalists are announced and before December 1, 2021.

• All entries must be electronically submitted by midnight Pacific time on or before the respective deadline.
• Write LA is open to anyone worldwide 18 years of age or older at the time of entry.
• Previous entrants who reached the Semifinalist level or above may not submit the same script or a new draft of the same script again. Such entrants may enter new scripts or scripts that did not advance in previous years.
• Previous Write LA winners are not eligible to win again.
• Any script that has been worked on in a personal coaching capacity with Head Judge Tim Schildberger is NOT eligible for entry. Writers may enter other scripts not previously read/coached by Tim.
• Initial judging of Write LA is done BLIND. The entrant’s name, address, phone number, or any other identifying information should NOT appear on the title page or any other page of the script. The title page should only include the title of the script or show and the title of the episode, if applicable. Placing a Library of Congress or WGA registration number on the title page is acceptable, but not required.
• All entrants retain complete ownership of their scripts.
• An entry should consist of an original feature film screenplay (maximum 120 pages) or teleplay (maximum 70 pages). Speculative television scripts (i.e. an episode of The Simpsons) are not eligible. All scripts must be written in English. Scripts should be in standard screenplay format and font (Courier 12) and submitted as a PDF file through FilmFreeway. Scripts sent by mail or email are not eligible.
• Any genre is welcome. No genre or format (feature, half hour, or hour) will be given preference. Feature and television scripts will be judged together.
• Adaptations are permissible provided the writer has permission to adapt the original work. Adaptations of works in the public domain are permissible.
• Any script currently under option or previously optioned or sold is NOT eligible. If a script is optioned or sold during the judging process, the writer(s) must notify Write LA and will be withdrawn from the competition at that point, but the writer(s) will retain any contest placement earned up to the time of the option or sale.
• Collaborative work is eligible. By submitting, writing teams acknowledge that all members of the writing team agree to these terms and conditions. Writing teams also acknowledge that any prizes won must be shared by the writing team.
• Do not include resumes, pitches, synopses, casting suggestions, letters, or other supporting documentation with your submission. Judges will not review these materials.
• Entrants may submit multiple entries. Each submission must include its own unique script and entry fee.
• Once an entry has been submitted and payment has been processed, no refunds will be issued. No revisions or re-submissions will be accepted.
• Affiliates, employees, and family members of the readers, judges, and staff of Write LA,  are not eligible for the competition.

• By entering Write LA, you acknowledge and agree that contest judges, and the Management Companies who have agreed to read the 5 Finalist scripts receive numerous submissions of ideas, stories, and scripts, and that your entry and the ideas and stories embodied therein may be similar or identical to other material already received and/or developed by one or more of the judges/companies. Also, being read by a Management Company in no way implies an obligation for that company to represent or assist the writer. There are no assumptions, guarantees, or promises of representation included with the reading.
• By entering Write LA, you understand that Write LA, will be free to use your name, script title, and logline for promotional purposes without additional consideration should you qualify for the Semifinals or beyond.
• By entering the Write LA competition, you agree that you have read the rules and conditions of the contest and that you have the authorization to submit your screenplay to Write LA. You further agree that your screenplay is owned by you (and co-author(s)).
• The entrant shall indemnify and hold harmless Write LA, its employees, contractors, agents, and Write LA judges from and against any and all claims, liabilities, losses, damages, and expenses (including but not limited to attorney’s fees, and costs of the court) which may be incurred by reason of any claim involving copyright, trademark, credits, and/or publicity to the screenplay entered.
• VOID WHERE PROHIBITED OR RESTRICTED BY LAW. All federal, state, and local laws and regulations apply. 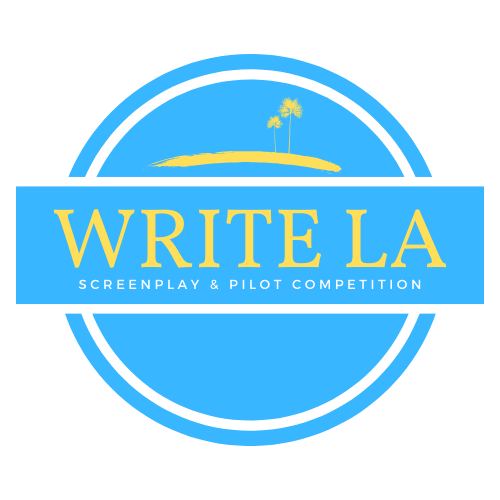