Accepting TV and Feature Scripts
Horror is one of the best genres for emerging talent and has helped launched countless careers. This year, we bring horror heavyweights to our jury including writer/director, showrunner Mike Flanagan of the hit Netflix shows MIDNIGHT MASS, THE HAUNTING OF HILL HOUSE, and THE HAUNTING OF BLY MANOR.
The ScreenCraft Horror Competition has a long history of creating success for our winners and finalists, many of whom have gone on to sign at places like Bellevue Productions, Kaplan Perrone, Affirmative Entertainment, Zero Gravity, Story Driven, and more.

New Finalist Benefits: All finalists will be invited to an exclusive Finalist+ workshop on how you can best position yourself and your writing to the industry. Also, all finalists will receive a free 6 month membership to The Tracking Board, so you can stay up-to-date on Hollywood's insider news!

So whether you’re writing a contained, socially-relevant horror movie, or a big horror TV series, our jury wants to read your script.

JURY
The top scripts are considered by our incredible industry jury looking for horror projects.

Mike Flanagan is a prolific director, writer, producer, editor, and partner at Intrepid Pictures, a feature film and television production company dedicated to creating elevated commercial content for global audiences. Flanagan is the creator, director, and showrunner of the hit Netflix Original series THE HAUNTING OF HILL HOUSE, which he executive-produced along with Trevor Macy. Following the mainstream success of the horror anthology’s acclaimed debut season, Netflix ordered a second season entitled THE HAUNTING OF BLY MANOR, and entered into an exclusive deal for non-theatrical content with Intrepid. Most recently, Flanagan created and directed the critically acclaimed series MIDNIGHT MASS. Flanagan is also the director of seven feature films, including DOCTOR SLEEP for Warner Bros. 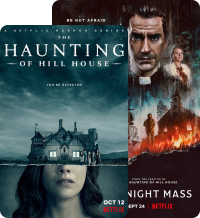 After working for Gary Ross on all the HUNGER GAMES films, Sandino Moya-Smith became VP of Development at MGM Studios, the iconic film studio behind films like CANDYMAN with Nia DaCosta. Antonio is a literary manager at the production and management company Circle of Confusion, whose clients include writer/directors Keith Thomas (FIRESTARTER), Anthony Scott Burns (COME TRUE), and Iris Shim (UMMA). His clients' films have played at Cannes, Sundance and SXSW, among others. As a production company, Circle's credits include THE WALKING DEAD, FEAR THE WALKING DEAD, and LOCKE & KEY. Circle clients have written commercial hits including DOCTOR STRANGE, SENSE8, and THE CONJURING. Guy Busick is an American film and television screenwriter best known for his collaborations with directors Matt Bettinelli-Olpin and Tyler Gillett, including SCREAM 5 and READY OR NOT. Dan Kavanagh works in the TV development department for Roy Lee’s Vertigo Entertainment, the production company responsible for projects like IT, THE GRUDGE, THE DEPARTED and many others. Mentorship Prize - 2 Winners to be selected!

This optional add-on prize category will identify two winners to learn, workshop, and strengthen their project with guidance from an industry mentor. Horror competition mentors are Greg Newman (Exec. VP at Dark Sky Films/ Queensbury Films) and Jim Klock (actor, writer, producer, and head of Terror Films). Each mentor will select one writer/writer team that includes this unique add-on benefit with their entry.
Greg Newman - EVP of Dark Sky Films/Queensbury Pictures
Dark Sky Films works with emerging talent as well as established veterans to develop, produce and finance feature films and episodic television projects. The company produced Netflix's THE GIRL ON THE THIRD FLOOR, the writing and directing debut of Queensbury partner Travis Stevens.
Jim Klock
Actor and filmmaker Jim Klock is the head of Terror Films. Most recently, Jim produced the feature film ALREADY GONE alongside Keanu Reeves, starring Sean William Scott and directed by Chris Kenneally, and released theatrically in September 2019. He also directed the Amazon exclusive horror film, SLAYED.
Only projects submitted to the ScreenCraft Horror Competition AND that select this add-on are eligible for consideration in this category. Additionally, all projects that place in the Top 10 of the competition will automatically be considered.

1. Submissions are accepted via electronic submission only.